These Ameci Pizza Kitchen franchises are ran by The Ekblad Brothers. There are four of us brothers: Steve, Tim, Nick, and Chris. We all have worked at various Pizza locations such as: Dominos, Roundtable Pizza, Tony's Pizza, and lastly Ameci Pizza Kitchen. We found our home at Ameci's through the extensive care and quality that goes into making the product here.

We have been involved in the Pizza World for 7+ years now and have learned many different ways to handle Customer Service, Quality Control, and how to create a true atmosphere that everyone can enjoy.

There is one rule that we abide by the most and that is seeing our customers leave with a smile on their face. If, for whatever reason, you are not satisfied with a trip to one of our stores please feel free to reach out and we will do whatever it takes to change that for you.

The following are recent articles about "The Ekblad Brothers":

Brothers got into the business in their teens 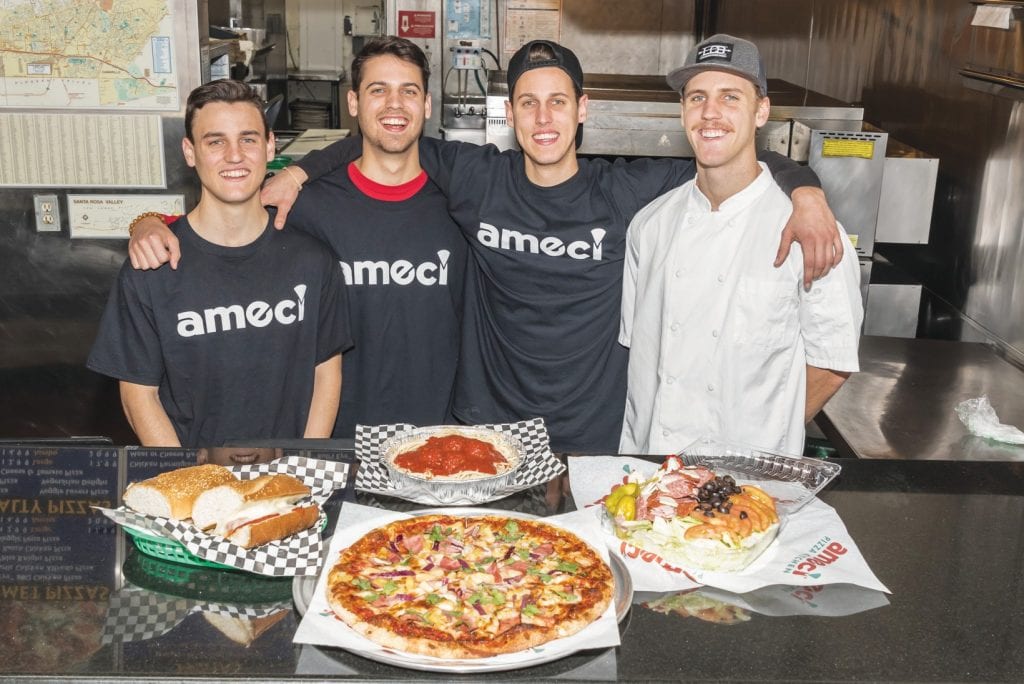 Domino’s, Pizza Hut, Papa John’s—name just about any pizza delivery place in eastern Ventura County and it’s a good bet that one or more of the four youngest Ekblad brothers worked there as teens growing up in Newbury Park.

After spending many of their teen years making and delivering pizzas, the close-knit brothers, who are now in their early 20s, opened their own pizza franchise, Ameci Pizza, on Dec. 1 at Camarillo Village Square.

As small-business owners, the younger Ekblads say, they don’t argue when it comes to splitting up the chores and duties that come with running a pizza restaurant, Chris said.

“We’ve always worked together as a team,” he said. “We’ve been very close our whole lives, so coming into this is just natural for us.”

Nick said their venture into entrepreneurship began when the owner of the Ameci’s in Newbury Park hired him at age 19 and within a few months promoted him to manager. Nick brought his brothers aboard as employees “because we’ve been doing pizza together so long.”

The owner took him under his wing, Nick said, mentoring him on the Canoga Park-based company’s nine-step process to obtaining a franchise. For financing, the brothers pooled their resources and received help from investors, Steve said.

It was no small investment.

Ameci’s Pizza and Pasta, which opened its first restaurant in 1984 in Los Angeles, today has about 40 franchises in California. An initial investment for a franchise can be anywhere from $225,000 to $325,000.There’s also a 6 percent royalty fee that must be paid annually to the company.

Prospective franchisees must go through an informal interview, which determines if the applicant is a good match, according to the company’s website.

The Ekblad brothers’ interview took place at the Ameci’s in Newbury Park. Nick Andrisano, who founded the company with business partner Angelo Falato, interviewed the four men, who brought along their parents.

“As soon as they walked in, I could see it in their eyes—they wanted that place,” Andrisano said in a phone interview. “After 40 years in the business, I’m pretty good at reading people.”

Andrisano said the brothers told him they had learned from Nick Ekblad’s boss in Newbury Park that the Camarillo Ameci’s was about to be sold, so they applied for the franchise.

“They knew it was being sold before I did,” Andrisano said. “These kids were eager to take it on.”

The brothers are young, Andrisano said, but he felt confident they could handle operating a small business.

“Their father is a businessman,” he said.

Besides, the Ekblad’s aren’t the only holders of an Ameci’s franchise who are under 30, he said.

Those young owners grew up with and have stayed loyal to the product, he said

“I have one (owner) who is 36 now, and the other day he showed me an old home movie of himself when he was having his fourth birthday party—and there were the Ameci’s pizza boxes.”

Originally opened in the early 1990s, the Camarillo franchise started out doing “fantastic” business, but the former owners “kind of let it go down,” he said. Since the Ekblad brothers took it over in December, the business has picked up, Andrisano said.

Although his three other siblings in the business venture never went to college, Steve Ekblad earned a bachelor’s degree in business from Cal Lutheran University, he said, which helps in running the franchise.

As a whole, the pizza industry is hot right now, according to PMQ Pizza Magazine, which tracks trends and promotes the dish. It’s a $45-billion-a-year industry, with some 75,000 pizzerias across the country.

Over 80 percent of consumers report eating pizza at least once a month, the magazine’s website said. PMQ’s 2018 survey of U.S. pizzeria owners also found that over 60 percent reported increased sales from the previous year.

All of this bodes well for the Ekblad brothers, who, despite having just started on their first small-business venture, are already making plans to leave their mark in the pizza business.

“We want to open as many of these locations as we can,” Nick said.

Lisa McKinnon, VenturaPublished 11:00 a.m. PT Feb. 27, 2020 | Updated 11:28 a.m. PT Feb. 27, 2020
Hot Cheetos and vegan cheese are now among the optional toppings for pizza and chicken wings at Ameci Pizza Kitchen in Santa Paula and Camarillo. The franchise locations are operated by the Ekblad brothers, all still in their 20s.

Before the Ekblad brothers became the youngest franchisees in the Ameci Pizza Kitchen chain – with two locations, and counting, to their credit – they went through what amounts to the pizza school of hard knocks.

Steve Ekblad, now 25, started working at a Domino's in Newbury Park while he was still in high school. The job included answering phones, closing up at 2 a.m. on the weekends and delivering pizzas to people who sometimes forgot to include a tip.

And yet, one by one, he was able to talk brothers Tim, Nick and Chris, now 24, 23 and 22, respectively, into working at the same restaurant.

"You're around pizza all day. It's not like you have to twist people's arms too hard," Steve said with a laugh.

"From there, we kind of trickled out all over the place," added Tim, reeling off the names of the east Ventura County pizzerias where the brothers worked solo or in pairs.

Then Nick got a job at Ameci in Newbury Park, the brothers' hometown. The business' owner, Doug Lorenger, promoted Nick to manager, encouraged him to bring in his brothers, and started mentoring him on the ways of the Canoga Park-based chain formerly known as Ameci Pizza & Pasta.

"He really liked it there. So we all quit our jobs and joined him," said Tim.

Lorenger had previously operated Ameci in Camarillo before selling it several years earlier to his brother. When the brother decided to sell last year, the question was: Were the Ekblads interested in buying it? They were.

"We've always been entrepreneurial," said Steve, who launched a T-shirt printing company in high school and went on to earn a bachelor's degree in business at California Lutheran University.

The brothers pooled their money and tapped investors (read: family members) to buy the Ameci at the Camarillo Village Square shopping center in December 2018.

Before adding the Santa Paula location last November, they broadened the search for investors to include neighbors from the street where they grew up with three older brothers: Mike, 35, and Dan, 31, who work with their father's plastering company, and Matt, 33, a firefighter with the Los Angeles Fire Department.

By taking over two Ameci locations that opened before they were born, the four Ekblads have helped inject new life into the chain founded in 1984 by Nick Andrisano and the late Angelo Falato.

"They bring youth. They bring the future. They understand the business and are doing a great job," said Andrisano, the chain's president.

Despite the rebranding, both restaurants retain their original exterior signs. Changing them is an expense that will have to wait, said Tim Ekblad.

"We're spending our money on offering a quality product for customers. We grind our cheese daily. Our dough is made fresh every day. I drive to Van Nuys to pick up the ingredients all of the Amecis use. We get the bread for our subs from Doris Bakery right here in Camarillo," he said.

Chris Ekblad, 22, co-owner of Ameci Pizza Kitchen, serves a spaghetti meal to Melissa Mendoza at the chain's Santa Paula location. Ekblad is one of four brothers who took over the restaurant in November 2019, about a year after they bought the chain's Camarillo location. (Photo: JUAN CARLO/THE STAR)

They're also making use of Instagram and other forms of social media to tout the inclusion on the menu of such comparatively new ingredients as vegan cheese, gluten-free crusts and Flamin' Hot Cheetos, the latter available for sprinkling over pizzas, chicken wings or any other dish in need of some crunch and a jolt of color.

"Our motto is, 'If you don't see it, ask, and we'll make it'," Andrisano said of keeping up with the culinary times.

An avid photographer who studied at Moorpark College, Tim is in charge of the restaurants' Instagram page, @amecipk. Last year, he used its Stories feature to post photos chronicling his quest to eat pizza for 45 days straight. (The posts can be found in the Instagram Highlight titled "Pizza Streak.")

"I started out with pizzas that had everything on them and switched to plain cheese pizzas as I went along. I learned that our stuff is that good. You don't need a lot of toppings," Tim said.

After buying the Camarillo restaurant, the brothers gave the roughly 1,400-square-foot space a top-to-bottom scrubbing, a new paint job and decorative, New York-style pizzeria flourishes like red gingham tablecloths and a faux-brick wall behind the shelf where pizza boxes are stacked in rows.

They also brought the restaurant into the digital age, replacing the menu boards with large screens and adding online ordering for pick-up and delivery. The latter is done by employees or whichever Ekblad brother is available, and by a third-party delivery service like DoorDash, ChowNow or the pizza-specific Slice.

Nick Ekblad, 23, co-owner of Ameci Pizza Kitchen in Camarillo and Santa Paula, prepares dough for a pizza order. Ekblad and his brothers are the youngest franchisees in the Canoga Park-based chain, which launched in 1984 and has nine locations in and around Ventura County. (Photo: JUAN CARLO/THE STAR)

In Santa Paula, Ameci is located in a 900-square-foot strip-mall space tucked between a salon and a dental office. It features red, white and green tiles and molded seating the Ekblads believe dates to the store's opening in the early '90s. They added Slice and ChowNow to the location's existing delivery service, DoorDash.

"We've got three tablets showing orders in the kitchen now. That's a big difference from the old days," said Steve.

Ameci has 35 locations in the state, with three more under development in northern California. Nine existing Ameci restaurants are in and around Ventura County, where the Ekblads say they would happily take on an additional location if the right opportunity came along.

"We heard about Santa Paula through our UPS lady, so we've always got our ears open," Tim said with a laugh.